FOLK ALBUM OF THE MONTH IN THE GUARDIAN – ‘Direct, atmospheric and deeply affecting‘ ★★★★ The Guardian

RUNNER-UP IN fROOTS ‘EDITOR’S CHOICE’ ALBUM OF THE YEAR IN 2018 CRITICS POLL. 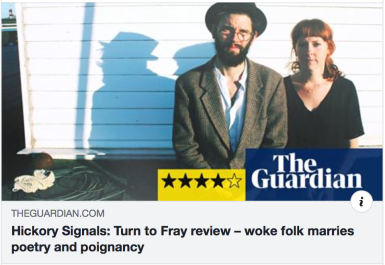 Multi-instrumentalists Laura Ward and Adam Ronchetti, a.k.a. Hickory Signals, are a folk duo from Brighton. The duo’s sound is based around Ward’s powerful leading vocal and Ronchetti’s vibrant acoustic guitar and pulsing cajon to which they add flute, percussion and shruti drones, building each song to rousing effect. Their set combines re-interpretations of traditional folk songs with original, self-penned material. Ronchetti and Ward are joined regularly in the studio and on the stage by violinist and producer, Tom Pryor, whose sensitive string arrangements lend themselves to the duo’s unique, cinematic sound.

On 16 November 2018, Hickory Signals released their debut album, Turn to Fray. The album has been well received. The Guardian named Turn to Fray Folk Album of the Month in November 2018 and called it ‘Direct, atmospheric and deeply affecting‘; the album made runner-up in fRoots ‘Editor’s Choice’ Album of the Year in 2018 Critics’ Poll. English Folk Dance and Song Society (EFDSS) called it a ‘stunning debut…as old as time and modern as the moment’. FATEA called it ‘an album to be enjoyed and explored‘ and Folking.com said ‘it’s an extraordinarily powerful work, sometimes painful, sometimes rather surreal and always absorbing‘. RnR Magazine ‘an encouraging debut’ and Songlines ‘clear direct and honest’.   See here for more reviews.

Recorded at Studio 95 in Brighton by Tom Pryor, Turn to Fray is comprised of two traditional arrangements, eight original songs, and an interpretation of Frankie Armstrong’s stunning anthem, ’Doors to My Mind’. The compositions include strings (Tom Pryor), banjo (Scott Smith, Porchilight Smoker) cello (Amy Squirrell, The Captains Beard) and bass (Phil Ward, The Galleons). The album was mixed by Ian Carter, mastered by Lowland Masters and is released on independent label GF*M Records and distributed via Proper Distribution.

Throughout 2018 Hickory Signals have enjoyed a busy live performance schedule including various folk clubs and festivals. Highlights were supporting Rod Clements at Wokingham Music Club and being booked for Cambridge Folk Festival’s notorious Club Tent in July 2018 where they performed to a packed and appreciative tent. In August 2018 the duo took their music overseas, playing a few select dates on a mini-tour across the west of Ireland in Sept 2018, including the infamous Levis’ Cornerhouse in Cork’s Ballydehob. In November they released Turn to Fray with a series of sold-out shows on the South Coast.

Previous live show highlights include headlining ‘Folk Rising’ at Cecil Sharp House in 2015, support slots for the likes of Buddy Whittington, Blazin’ Fiddles, Stick in the Wheel and Hattie Briggs, Club Tent stage slots at Cambridge Folk Festivals 2014, 2015 and 2016 plus a number of local festival slots. Hickory Signals supported acclaimed Canadian folk band, Le Vent Du Nord, at the Ropetackle Centre in Shoreham By Sea in August 2016 to an enraptured audience. For upcoming gigs, head over to the shows page.

Hickory Signals’ second EP, ‘Noise of the Waters’, produced by Stick in the Wheel’s Ian Carter, was released in November 2016 to critical acclaim.

Laura and Adam are part of four-piece folk collective, Bird in the Belly. Together the band have been collecting and arranging traditional material and will release their debut album in March 2018. For up to date news about the album and for the band’s live tour schedule, check out their Facebook page.

The duo also runs their own monthly live music night at a beautiful arts venue in Shoreham By Sea; the West Street Loft. The events run on the 4th Friday of each month and have been established for around two years. Phil Jones of Hatful of Rain called the night “one of the most important roots evenings on the South Coast”. All West Street Loft events are listed on the shows page. Bands wishing to play a night should contact info@hickorysignals.com.

Click here and we'll send you a monthly newsletter with upcoming shows and new releases!